This player has a name that almost looks like a Roman numeral: 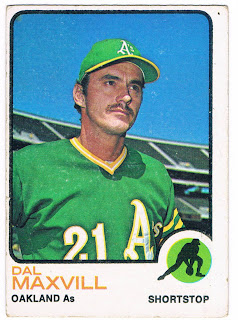 Card #483 -- Dal Maxvill, Oakland A's
(T. Sean Shannon...a reader of this blog, stand-up comic and a Facebook friend of mine said that on one of his homemade videos. I couldn't find the one with Maxvill in it...but here's one he did for the 1973 Topps set.)

Dal Maxvill had only come to the A's in September 1972 after having spent his entire career in St. Louis. This is a photo that may have otherwise been airbrushed. Thankfully, Topps had a photographer contact in the Bay Area, as it seems a lot of cards had pictures taken in San Francisco and Oakland. He would end up in Pittsburgh during the 1973 season, but returned to the A's in '74. Thanks to his years on the Cardinals and A's, he won four World Series rings between 1964 and '74.

Maxvill was a great infielder, but a notoriously weak-hitting batter. In 1970, he set a record for players with at least 150 games played by accumulating only 80 hits all year. He also went 0-for-22 in the 1968 World Series, which is still a record for futility in a single Series. In fact, during his time in St. Louis, it was said that Bob Gibson should take the eighth spot in the batting order, since he was more valuable as a hitter.

After retiring, Maxvill became an executive, and served as the general manager of the St. Louis Cardinals from 1984-1994.
Posted by Chris Stufflestreet at 8:30 AM