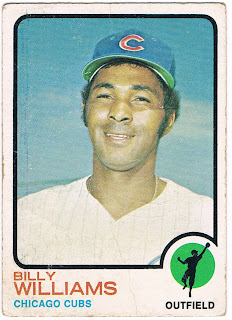 Billy Williams was a lot of things to Cub fans during the 1960s and early 70s. He was an Iron Man, and he hit for average as well as power. He was the National League Rookie of the Year in 1961. He was a six-time All-Star. As it turned out, the only thing he wasn't able to do in Chicago was play in the postseason...so they traded him to Oakland after the '74 season.

Williams spent two years in Oakland as one of the early beneficiaries of the new DH rule. In 1975, he finally made his first postseason, but the A's fell to the Red Sox in three games. After retiring, he became a major league coach.

Billy Williams was elected to the Hall of Fame in 1987. While few fans debate his place in Cooperstown, his name and that of Fergie Jenkins are often brought up as reasons why Ron Santo hasn't been able to get in as well. Which I've never really understood.
Posted by Chris Stufflestreet at 8:30 AM