This guy was quite an imposing character when he took the mound: 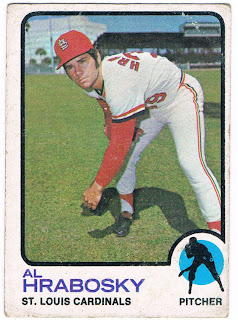 Card #153 -- Al Hrabosky, St. Louis Cardinals
When he came in to pitch, Al Hrabosky stalked to the mound. He glared and brooded. He turned his back to the batter and psyched himself up, inciting himself into an angry mood. He eventually sported a Fu Manchu mustache, giving him an even more sinister appearance. It must have worked; he would post a 64-35 all-time record and notch 97 saves (before the statistic was amped up as the specialists developed) during his career.

He pitched with the Cardinals from 1970-'77. In 1975, he led the league in saves (22) and winning percentage (13-3, .813) and was named Fireman of the Year. In 1977, new Cardinals skipper Vern Rapp demanded he shave off his facial hair. He complied, but his numbers were substandard. He was traded to Kansas City after the season.

That 1978 season with the Royals saw him get into his only postseason. He pitched in three games of the ALCS against the Yankees in a losing cause. After two years with the Royals, Hrabosky dipped into the free agent pool and signed with the Braves before the 1980 season. He was there for three years but notched only seven saves during that time as his playing time diminished. In 1983 he tried to catch on with the Chicago White Sox but retired during Spring training.

After stepping down from the mound, Hrabosky stepped into the broadcasting booth. He has been doing color commentary for Cardinals games and has hosted a radio sports talk show in St. Louis.

And although he was very well known for striking fear into the batters he faced, it seems Hrabosky is one of the nicest guys you'd ever meet in person.
Posted by Chris Stufflestreet at 8:30 AM