Waiting For the Forceout

Waiting for the throw as Bert Campaneris makes his way to first, Bob Oliver has his glove ready and hopes the throw isn't off: 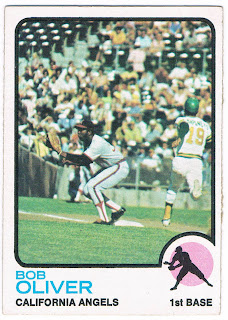 Card #289 -- Bob Oliver, California Angels
Actually, this picture may have worked better on a horizontally-oriented card. There were certainly worse images in the set that were given that treatment.

At the time this picture was taken, Bob Oliver was a teammate of Nolan Ryan. His son Darren was also a teammate of Ryan's, during the Hall of Famer's final season in 1993. He was a new member of the Angels in 1972, having been traded from the Royals in May. He would stay in California until late in the '74 season, when he was traded to Baltimore. He played with the Yankees in 1975 and then three more years in the minors before retiring.

An original member of the Royals in 1969, Oliver was the first player on that team to hit a grand slam. he also was the first to collect six hits in a nine-inning contest.
Posted by Chris Stufflestreet at 8:30 AM