This player defined "workhorse," being one of the last pitchers to regularly throw 300 innings a season: 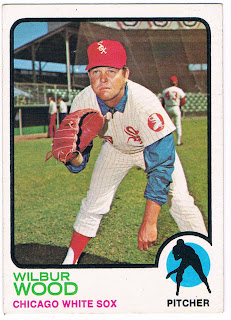 Card #150 -- Wilbur Wood, Chicago White Sox
One of the more dominant hurlers of the early 1970s, Wood finished second to Gaylord Perry in a very close race for the Cy Young award.

Wood came up in 1961 with the Red Sox. Primarily a reliever at first, he had a career record of 1-8 with the BoSox and Pirates before getting traded to Chicago in 1966. After arriving there, Hoyt Wilhelm showed Wood how to throw a knuckleball and encouraged him to use it exclusively. In 1971, he was converted to a starting pitcher by White Sox skipper Chuck Tanner.

Despite his reluctance to join the rotation, he soon became a feared and respected pitcher. He was called upon to do things that weren't seen since the "Dead Ball" era. He started 49 games in 1972 -- no other pitcher had started that many since 1904 -- and was even on the mound for both games of a doubleheader in 1973.

Unfortunately, a line drive by Ron LeFlore back to the mound in 1976 shattered Wood's kneecap. He had surgery and was able to return, but he never was the same. He stuck it out until 1978 before retiring.
Posted by Chris Stufflestreet at 8:30 AM