This is a great action shot. 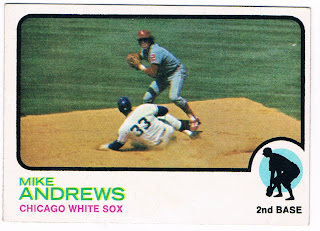 Card #42 - Mike Andrews, Chicago White Sox
While sidestepping a sliding runner, Andrews is preparing to throw to first for a possible double play. However, the runner's number poses a question...who is that? Andrews is wearing a White Sox road jersey. With his opponent sporting pinstripes and a dark helmet, you'd think he was playing against the Yankees but there's a problem: the 1972 Yankees didn't have anybody who wore #33. Andrews was also on the Chisox in 1971, but the Yankees didn't have a player who wore #33 that year either. However, the Indians wore pinstripes on their home uniforms in '71, which would make the runner Rick Austin. Unfortunately, Austin never played against the White Sox at all in the '71 season. Besides, the runner's helmet looks more blue than the Indians' black hats of '71. Unless the photo was taken in a Spring Training game against the Yankees, I'm at a loss for identifying the runner.

Mike Andrews was probably best known as a member of the beloved 1967 Boston Red Sox team. '67 was Andrews's first full season and he would remain with Boston until 1970, when he and Luis Alvarado were forced to trade their Red Sox for White in exchange for Luis Aparicio. 1973 would be Andrews's final season. He was released by the White Sox midway through the year and signed with Oakland. During the '73 World Series he would be forced by owner Charlie Finley to sign an affidavit saying he was disabled after making two errors that contributed to the team's loss in Game 2. After pressure from his teammates, manager and the press, Commissioner Bowie Kuhn overturned the document and he was allowed to play Game 4. However, he grounded out as a pinch hitter and sat the rest of the Series. It would be his final major league appearance.

In 1984, Andrews became chairman of The Jimmy Fund, a charity that raises funds and awareness of children's cancer that is closely tied with the Red Sox players. He holds that position today.
Posted by Chris Stufflestreet at 8:30 AM