Perhaps better known to fans today from his job as a broadcaster for baseball games, but he was also a very good ballplayer. 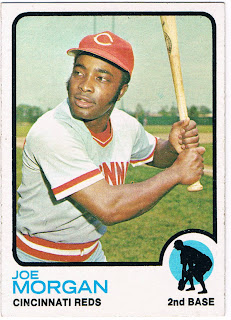 Card #230 -- Joe Morgan, Cincinnati Reds
The picture is obviously a Spring Training shot, as he looks to be posing on a neighborhood field. Seriously, he looks like he's taking a swing on the same field where I played my high school games.

(Edited to add: Reader Wrigley Wax says in the comments below this may have been taken at Shea Staium. While the shot has more trees and smaller buildings than what I remember seeing while visiting the Flushing, Queens area...I will admit that I was there much later than when the picture would have been taken. I'll allow that the neighborhood may have been more suburban in '72 than it was by the 1990s. In any case, Morgan's road uniform suggests he could be in any of the National League parks except Riverfront Stadium. Thanks for the info.)

In a Hall of Fame career, Morgan was one of the finest second basemen in major league history. When the Houston Astros traded him to the Reds after the 1971 season, his presence in the lineup made Cincinnati much more dangerous. With Morgan batting right behind Pete Rose, he presented a threat because of his power, speed and glove. Among his achievements: eight straight All-Star appearances as a Red, back-to-back World Series titles in 1975 and '76 and back-to-back league MVP awards in those same years.

After going back to the Astros in 1980, Morgan continued to be productive as his career wound down. His leadership on and off the field with San Francisco in 1982 won him the Comeback Player of the Year award. He would reunite with Big Red Machine teammates Rose and Tony Perez on the 1983 Phillies and return to the World Series. Retiring after the '84 season (spent with the Oakland A's), Morgan went into the broadcast booth, where he remains today. Although he has now spent more seasons describing the action on the field than he did taking part in it, Morgan has become a polarizing figure among fans. There are fans who appreciate the insight a Hall of Fame player can bring to a game as nuanced as baseball, but there are also many who don't care for his analysis.
Posted by Chris Stufflestreet at 8:30 AM