The Former Bane of My Collecting Existence

Although I have finished all the regular Topps sets from 1973 through the point in the 1990s when I stopped worrying about current sets, I found some minor bumps in the road while working towards those sets. As I headed into the home stretch on a wantlist (say, 20 or so cards left), I found that certain teams -- the Reds, Red Sox and Tigers -- were among the cards left and one player's name seemed to keep popping up for many of the years: 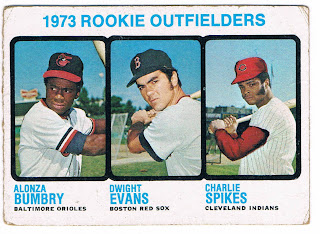 Card #614 - 1973 Rookie Outfielders
It's that guy in the center. Dwight Evans was more than just a good player who was a constant presence in the Red Sox' rightfield position. He was one of the last few players I needed for many Topps sets of the 1970s and early 1980s. He was a part of the team through 1990, enduring four tough postseasons (1975, '86, '88 and '90) and endearing himself to the Fenway faithful. In his final season in 1991, he looked absolutely different in a Baltimore Orioles uniform.

Similarly, Al Bumbry spent a long time with one team (Baltimore) and endured some heartbreaking postseasons as well: 1973 and '74, when the Orioles were stopped by the Oakland A's in the playoffs and 1979 when they were shut down by the "We Are Family" Pirates. However, Bumbry managed to get a Series Ring in 1983. In 1985, he went to the Padres as a free agent and -- like Evans -- looked totally out of place in the uniform.

Charlie Spikes is shown airbrushed into his Indians threads on this card. That's because he was a Yankee in 1972. He would be included in the deal that sent John Ellis to Cleveland and Graig Nettles to the Bronx (and both of those players would be airbrushed -- poorly -- in the 1973 set). He would roam the outfield on four different teams through 1980.

Oh yeah...and you probably won't be surprised to find out this card was one of the last I needed for the 1973 set.
Posted by Chris Stufflestreet at 8:30 AM