Catcher Moving in for the Kill

While many of the action shots featured so far on this blog have been on horizontal cards, here's a vertical picture that fits the card well: 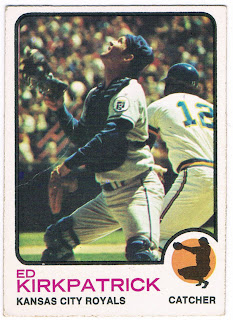 Card #233 - Ed Kirkpatrick, Kansas City Royals
Taking off his mask and looking for a pop fly, Kirkpatrick is ready to make a grab. Meanwhile, Johnny Briggs of the Brewers is running towards first, in the event the ball is lost in the sun. According to information on baseball-reference.com, this picture was taken on June 17, 1972. Kansas City was playing in Milwaukee County Stadium. Briggs led off the bottom of the 4th against Paul Splittorff and Kirkpatrick caught the ball.

Though shown as a catcher on this card, Kirkpatrick played several different positions on the field. Over the course of his career, he played every position except pitcher and shortstop. Kirkpatrick was the Royals' regular catcher in 1972, but would be moved to the outfield for '73 before being traded to Pittsburgh in the offseason. His final season was 1977, and was split between the Pirates, Rangers and Brewers. Despite largely being a utility player, he would appear on Topps cards each year through 1978.

Sadly, tragedy struck after his retirement. In 1981, Kirkpatrick was involved in a car crash that put him in a lengthy coma. He would eventually come out of it, but the accident left him paralyzed.
Posted by Chris Stufflestreet at 8:30 AM