Swift Kick to the... 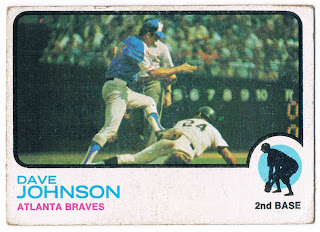 Card #550 - Dave Johnson, Atlanta Braves
While the picture is probably showing Dave Johnson getting knocked over or jumping out of the way of the play at 2nd, he almost looks like he's kicking Yankee baserunner Felipe Alou squarely in the rear. There are an awful lot of people who don't blame him for doing that. It was unnecessary; you can see the umpire's fist to Johnson's right signaling the out.

However, something's wrong with the picture. The Braves hadn't played a game at Yankee Stadium since the 1958 World Series (and wouldn't again until another Series in 1996), so Johnson's photo has been altered. Johnson had spent his entire major league career through '72 as a member of the Baltimore Orioles, which explains the opponent and venue. Topps simply took an action photo and painted his cap, shirt and stirrup socks, right down to filling in the number on his back and adding the feather to the sleeve. It's a better job than many of the airbrush jobs seen in the 1973 Topps set.

For Davey Johnson, 1973 would be a career season. He hit 43 home runs, one of three Braves (Darrell Evans and Hank Aaron were the others) to get at least 40 that year. 42 of those round-trippers came while he was playing second base, which set a major league record for the position. He would play three seasons in Atlanta, then move to Japan for a couple of years. In 1977, he came back with the Phillies and ended his playing career with the Cubs in 1978.

After a decent playing career, Johnson began a more successful second career as a manger. During the early 1980s, he won pennants at three different levels in the Mets' organization, which led to the team naming him as their skipper in 1984. He, in turn, would lead the team to a World Series win in 1986. Ironically, Johnson was the final Oriole batter in 1969 when the Mets won their only other title.

After the Mets, Johnson managed the Reds, Orioles and Dodgers. He was generally successful at each stop, with only one losing season through 12 complete campaigns. However, his laid-back style in dealing with players and differences with his superiors didn't make a lot of friends in major league front offices. Eventually, they wanted to do with him as he appears to be doing on this card.
Posted by Chris Stufflestreet at 8:30 AM