Here's a photo that is a little more than just a catcher politely posing for the camera in his signature crouch: 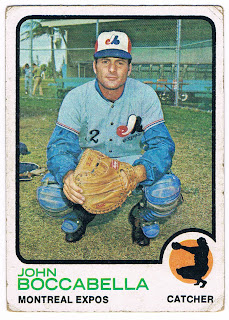 Card #592 -- John Boccabella, Montreal Expos
While John Boccabella waits for the cameraman to finish snapping a photo, you can see other stuff around him. The rest of his catcher's gear is laying on the grass behind him, some palm trees show that he was at Spring Training, and two people are talking behind the backstop: a player and a person (groundskeeper, security guard or somebody) wearing a khaki uniform.

Boccabella is called a catcher on this card, but played at several positions during his career. For many of his seasons with the Cubs (1963-'68) and Expos (1969-'73) he was used wherever he was needed, as a utility player. In fact, 1973 would be the only season in his career he appeared in over 100 games. He was the Expos' regular catcher that year, but it was the only time he was a regular anywhere.

That said, he's still fondly remembered by Expos fans. Beginning in the franchise's first year, the team's public address announcer at Jarry Park would say out his name phonetically: "John...Boc-ca-BELL-a!" Though used primarily as a substitute player, he became better remembered than some of the regulars.
Posted by Chris Stufflestreet at 2:59 PM