A Big Mound of Dirt

Here's a photo that's been airbrushed but actually isn't too obvious. 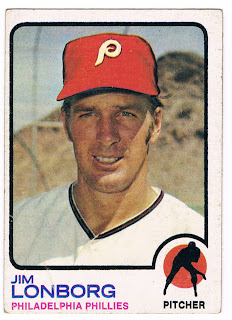 Card #3 - Jim Lonborg, Philadelphia Phillies
It would be Jim Lonborg's second straight airbrushed card. In 1972, he appeared on card #255 with a painted-on Milwaukee Brewers cap. However, there was no need for Topps to call their airbrush artist to "fix" any more of Lonborg's cards; he would remain with the Phillies until retiring in 1979.

Looking behind the fabricated Phillies cap...one wonders what is behind him in the picture. Is that a sand dune? A municipal landfill? The Pyramids?

Despite spending several years in Philadelphia, Lonborg is best known for his seven-year stretch in Boston. His best year was 1967, where he helped the Red Sox win the pennant in the "Impossible Dream" season. He pitched the game that clinched the '67 pennant for the BoSox and won the Cy Young award for his effort. Even though he would go to other teams, the Fenway faithful never forgot him. That gratitude went both ways: after hanging up his glove, Lonborg would go to dental school and began practicing as a dentist. Though born in California and a graduate of Stanford University, he returned to Massachusetts for his second career.

On the 1980s TV sitcom Cheers, Ted Danson played Sam "Mayday" Malone, a fictional bartender who had once played for the Boston Red Sox. The bar had a game-action "picture" of Sam hanging on the wall, put the photo actually showed Lonborg. Sam's uniform number was #16, also the number Lonborg wore. However, in the show, the timeline had Sam pitching for the team from about 1972-'77, which would have been after Lonborg left.
Posted by Chris Stufflestreet at 10:24 AM