A Team in Transition

What a difference a few years makes. For instance, when this picture was taken in 1972, many saw the Kansas City Royals as little more than an expansion team: 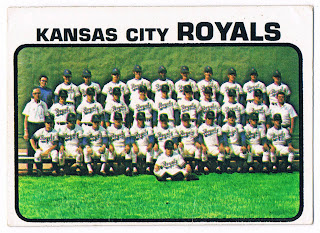 Card #347 -- Kansas City Royals Team Card
To be fair, they only began playing in 1969. Many of the members from that original team (Lou Piniella, Fran Healy, Ed Kirkpatrick, Paul Schaal, Dick Drago, etc.) were still on the roster as the 1973 season began. Despite a 2nd place finish in 1971, they returned with another losing season in '72, so little was expected of the team from many fans. However, under new skipper Jack McKeon, they reached 2nd again in '73. More than that, their farm system was developing some new talent. By 1973, guys like George Brett and Frank White began showing up on scorecards. In 1975, Whitey Herzog took over the managerial job and built the Royals into an AL West powerhouse. They won three consecutive division titles from 1976-'78 but lost all those pennants to the Yankees. Undaunted, the team managed to stay in the race year after year. They made it to the World Series in 1980 and won it in '85. The Royals were perhaps the most consistently good team in baseball for that era.

The team's record since the early 1990s...not so memorable. However, they were a force from 1975-'89 and this picture shows the beginnings of that powerhouse.

Fun Franchise Fact: Three of the first six Royals managers were Hall of Famers (Joe Gordon, Bob Lemon and Whitey Herzog). They have had 15 additional managers since, none of whom were enshrined in Cooperstown.
Posted by Chris Stufflestreet at 8:30 AM