Below the airbrushed Atlanta Braves cap is a man whose story should have been a lesson to others: 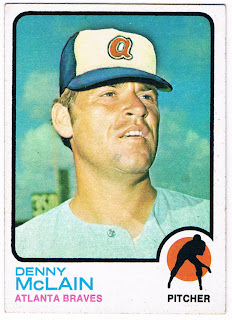 Card #630 -- Denny McLain, Atlanta Braves
Despite being included in the final series of 1973 baseball cards, Denny McLain was out of baseball before the card was even printed.

Denny McLain's career certainly had its share of highs and lows. From 1965 through 1969, he was one of the best pitchers in baseball. In 1968, he became the first person to win more than 30 games in one season since 1934 (to this day, nobody else has reached the milestone). For his effort that year, McLain won the MVP and Cy Young awards as well as a World Series ring. He followed that up with another successful year in '69 where he won another Cy Young. He was also an accomplished musician, recording two albums in the late 1960s and appearing on The Ed Sullivan Show, with Series opponent Bob Gibson joining him on guitar.

However, in 1970, his career fell apart. As he was riding high in the game, he was playing another game that was a lot more dangerous: he was gambling and allegedly associating with underworld crime figures. Anybody who's seen The Sopranos knows that those guys will use every bit of leverage they can to make their money and that having friends in the sporting world was a good thing. However, Major League Baseball has rules against that sort of behavior arising from the aftermath of the 1919 World Series and commissioner Bowie Kuhn suspended McLain for much of the '70 season. He was went to Washington (arguably, like many other nefarious types who have trouble keeping their money...oops, this is no place for a political tangent), where he lost 22 games and tried to get Senators manager Ted Williams fired. He split the '72 season between Oakland and Atlanta. Despite this 1973 card shown above, the Braves released him during the preseason and he never pitched in the majors that year.

For a person who squandered a great chance to be one of the league's immortal players, it's somewhat ironic to note that the last batter he ever faced on a big league diamond was Pete Rose.

After his playing days were over, McLain continued his shady dealings and consorted with dubious friends, eventually ending up in prison by 1986 and again in 1996. For a man who was one of the best pitchers in the game, his fall from grace was steep and sudden. And senseless.
Posted by Chris Stufflestreet at 8:30 AM