How bright was the shade of yellow used by the San Diego Padres during the early 1970s? This card shows an example: 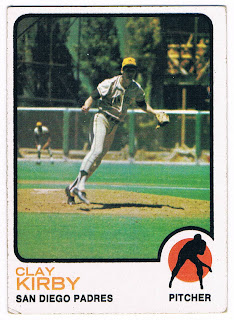 Card #655 -- Clay Kirby, San Diego Padres
You may have to click the card to enlarge it, but the card has one other person in the picture. Gotta love the way the yellow hat on that outfielder can be seen from all the way out there. As for the picture, that is an interesting part of the pitching delivery to put on a card.

Clay Kirby was an original member of the Padres in 1969 (losing 20 games that year as the staff ace), but 1973 would be his last year with the club. From 1974-'75 he was a member of the Cincinnati Reds' rotation. The change to a team that actually provided him some run support helped him immediately. However, he wasn't used by the Reds in the '75 postseason despite a 10-6 record, and was sent to Montreal for '76. That would be his final season in the majors.