The Player That Never Was

The photo on today's card is definitely airbrushed. That's because the player had not been in a major league game since 1970: 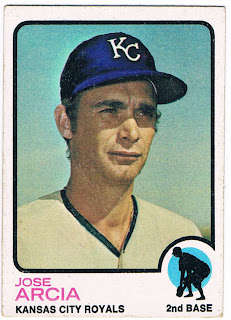 Card #466 -- Jose Arcia, Kansas City Royals
As it turned out, he never made it back to the majors for the Royals or anybody else.

Jose Arcia was a Cuban-born player signed by the Houston Colt .45s in 1962 but ended up taking a long road to get to the majors. After six years, a change from pitcher to fielder, eleven minor league teams and three trades among the major league clubs, he didn't get to "The Show" until 1968 when the Cubs selected him in the Rule V draft. He stayed with the Cubs for the entire year, mostly as a bench player. In 1969, Arcia was drafted again to be a member of the Padres. He spent two years for the Padres but turned out to be a poor hitter and baserunner. After the '70 season, he was sent back down to the minors.

Topps may have assumed he'd make the Royals' roster for '73, but he would remain in the minors until 1976.
Posted by Chris Stufflestreet at 8:30 AM