No, this post has nothing to do with an over-50 league, even if a few of the players featured stuck around in the majors until they were over 40. For those who don't keep up with old newspaper sports jargon, the Senior Circuit is the National League.

While some collectors might consider this to be a worthless card, I say it's a one-of-a-kind item that belongs in my collection: 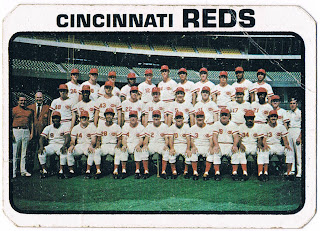 Card #641 -- Cincinnati Reds Team Card
Really, who else has an eight-cornered Reds team card? It's unique.

Taken at Riverfront Stadium, the team photo is loaded with stars. Not only are Johnny Bench, Joe Morgan and Tony Perez in the Hall of Fame, so is manager Sparky Anderson. Pete Rose is pictured as well, as is another man who was incredibly popular when he was a Reds player: Ted Kluzsewski. Davey Concepcion, George Foster and Ken Griffey are also part of what was a solid team.

Although the Reds lost the '72 World Series to the Oakland A's, they didn't let it bother them. Instead, they won back-to-back titles in '75 and '76, beating two teams that have perhaps the most vocal fans in the game.

But check out the guys on the left. I'm assuming those are the clubhouse manager and traveling secretary (please add to the comments if you know), but they remind me of Mr. Carlson and Les Nessman from WKRP in Cincinnati. Yes, that show may have come out five years after this card, but the fact that both are set in the same city doesn't escape me.
Posted by Chris Stufflestreet at 8:30 AM