The Card That Finished it Up...

Today is the one-year anniversary of this blog. At the rate I feature cards here, I should be able to keep this going for about four more years.

Marking the milestone, here's the final card I picked up (at the Chicago National in 2005) to complete the base set: 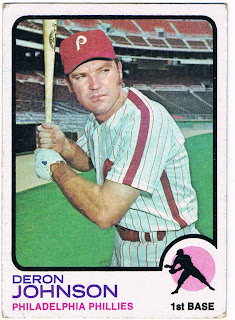 Card #590 -- Deron Johnson, Philadelphia Phillies
Johnson moved around often during his playing days, and 1973 was no exception. He was traded to Oakland a month into the season, which meant he immediatey went from a developing team to a contender. He managed to win a World Series title with the A's, something he didn't get do enjoy as a Yankee early in his career. As his career wound down, Johnson would be picked up by the Red Sox to help them in their '75 pennant drive after Jim Rice was injured, but it was too late to qualify for the postseason roster. As a result, that '73 Series ring would be the only one Johnson managed to earn.

After retiring in 1976, Johnson would go on to become a minor league manager and coach a number of major league teams through 1991. Sadly, he was diagnosed with lung cancer that year and died in '92.
Posted by Chris Stufflestreet at 8:30 AM