This is actually a fairly decent airbrush job that looks almost like he's wearing a brand-new cap: 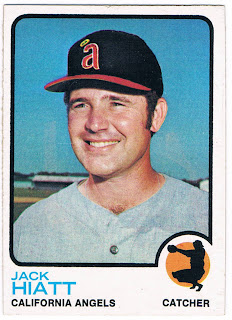 Card #402 -- Jack Hiatt, California Angels
Jack Hiatt split the 1972 season between Houston and California, the franchise he debuted with in 1964. Over the course of nine seasons and five teams, he wasn't able to get regular time behind the plate unless somebody got injured. However, those last several games he played with the Angels were exactly that: his last. The bottom stat line on the back of this card end up showing his final career numbers.

He had one brief chance to rise above the obscurity, though. In 1969, starting catcher Dick Dietz hurt his hand early in the season and Hiatt took his place. Taking advantage of the change in fortune, he got off to a hot start and even clubbed a game-ending (nobody called them "walk-off" back then) grand slam. However, his streak cooled considerably and he was soon below a .200 batting average. When Dietz came off the DL, he resumed his place in the lineup.

After Hiatt walked off the field...or out of the dugout, in his case, he became a minor league manager for several years and then served as the Giants' director of player development for 16 years through 2007.
Posted by Chris Stufflestreet at 8:30 AM