This is a really obvious case of a Topps artist painting a new uniform. The cap is actually pretty good, but the shirt gives it away: 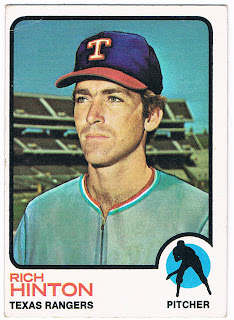 Card #321 -- Rich Hinton, Texas Rangers
His Texas uniform is airbrushed because he was traded away from the Yankees really late in the 1972 season, but he never appeared with the Rangers in 1973. He was traded before the season to Cleveland and sent to the minors. He wouldn't return to the majors again until 1975, as a member of the Chicago White Sox. It would be the second of three stints for the Southside nine.

Hinton played parts of six seasons between 1971 and '79, and never really managed to fit in as a regular. He was normally a relief specialist -- or a set-up man as they're called today -- and managed to toss two complete games in 1978.
Posted by Chris Stufflestreet at 8:30 AM