The Back of the Binder...

Today is April 15, a day that is normally synonymous with the IRS in the United States. This year, the filing deadline has been extended to Monday, but in commemoration of the day, here's a picture of somebody saying "Give me what you've got." 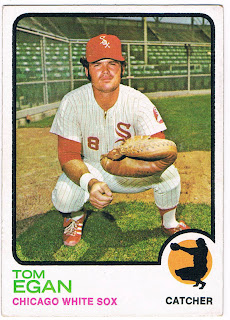 When I was a kid and only had a handful of '73 cards in my collection, Tom Egan was the last card in my binder. At the time, my means were limited and I had to use the few pages I owned to fit my growing collection. That meant the vintage cads were placed back-to-back -- 18 per sheet -- and in number order. When I picked up a new stack of cards, I had to do the labor-intensive work of reordering every card in the binder, which really wasn't a lot of fun if I picked up cards that had low numbers. However, in my '73 Topps set, Tom Egan was the first one I had to move to fit a new card.

As the years have gone on, I've slowly gotten my collection so my cards can be placed in their own spot when I get them and the backs can be read without having to take them out. While it's a lot quicker to put away my cards, it probably isn't a coincidence that my math skills improved considerably around the same time I was having to constantly rearrange those cards. But enough about me...

Despite appearing in the final series of Topps cards that year, Tom Egan didn't play a single major league game in 1973. Instead, he was sent down to the White Sox's AAA affiliate in Iowa and never made it back to the parent club. After the season, he was left unprotected and drafted by the Angels, the same team he played with until 1970. In his second stint with the Angels, he managed to catch Nolan Ryan's no-hitter on September 28, 1974. His career ended when the Angels released him halfway through the '75 season.
Posted by Chris Stufflestreet at 8:30 AM