Although Nolan Ryan had an amazing year in 1973 -- setting the all-time single-season strikeout record and throwing a no-hitter -- he didn't get the Cy Young Award that season. He was beaten out by this guy: 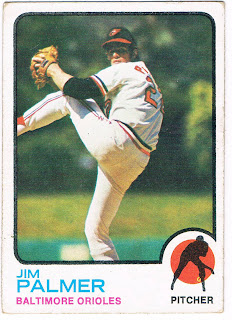 Card #160 -- Jim Palmer, Baltimore Orioles
In fact, despite all his records and the fact that he was a feared pitcher, Nolan Ryan never won a Cy Young in his Hall of Fame career. Jim Palmer, on the other hand, won three of them in a four-year period. He was arguably the best American League pitcher of the 1970s because he had a luxury that Ryan didn't always have: a terrific team backing him up.

The photo on the card demonstrates the high-kick delivery that was Palmer's trademark. He was a boy wonder when he came up as an 19-year old. In his first major league win, he helped his own cause by hitting a home run. He pitched his first World Series game in 1966 and beat Sandy Koufax with a complete game shutout. He went through a rough time the next couple of years, needing to be sent back to the minors and having surgery on his arm. In 1969, he regained his form and threw a no-hitter.

In 1970, he notched his first 20-win season. In 1971, he was one of four pitchers who won 20 games for the Orioles. In fact, from 1970-'78 he had at least 20 victories in every season but 1974. That season saw him develop elbow trouble that placed him on the DL for eight weeks. In 1983, Palmer's age was showing. After being sent to the minors for a while, he came back and helped the team to the World Series once more. The Orioles released him early in 1984 and he was a first-ballot Hall of Famer in 1990. Despite that status, he still attempted a comeback in 1991 but hung it up for good during Spring Training.

A bit of trivia: Jim Palmer is the only pitcher who has ever won World Series games in three decades. He's also the only player who appeared in all of the Baltimore Orioles' six World Series.
Posted by Chris Stufflestreet at 8:30 AM