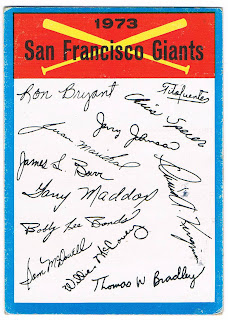 (No Number) San Francisco Giants Team Checklist
But I have to feature each card on my way through the set, so let me get this one out of the way. Hopefully, he'll see it as akin to ripping off a Band-Aid quickly in order to get it off. That said, there are some Giant fans out there who likely would mind if I neglected to talk about their team...so let's see if the names on the card present a full "field-ready" team...

Actually, I know it won't, because there was no listed Giants third baseman anywhere in the 1973 Topps set. But let's play anyhow.

Two first basemen are featured in Dave Kingman and Willie McCovey. Funny enough, Kingman played more at third base in 1972 (and '73). Fuentes and Speier take the keystone positions, while third and catcher are vacant. There are also only two outfielders listed here, Bobby Bonds and Garry Maddox. So, even if you moved one of the first basemen around to play other positions like they did in "real life," you'd still be short somewhere.

However, this team is heavy on pitching. Juan Marichal was a hard thrower, while Jerry Johnson and Ron Bryant were at their peak right about that time. Jim Barr, Tom Bradley and "Sudden Sam" are also ready to take the ball. And Dave Kingman gets a another mention here, as he spent four innings on the mound in 1973.
Posted by Chris Stufflestreet at 8:30 AM