Returning To a Relief Role 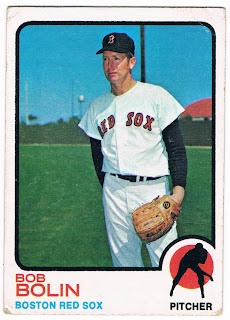 Card #541 -- Bob Bolin, Boston Red Sox
At the time, Bob Bolin was pitching for the Giants. It would be the lowest ERA of his 13-season career, but Bob Gibson's 1.12 record overshadowed it.

Bolin came up with the Giants in 1961 as a reliever, but would eventually earn a spot in the opening rotation by 1963. In 1964, he tossed a one-hitter against the Braves. By 1965, he was going back and forth between the two roles and continued to fill in where he was needed through the end of the decade.

Before the 1970 season, Bolin was traded to the Milwaukee Brewers and continued as both a starter and reliever. However, he was traded over to the Red Sox late in the season and contributed in the bullpen exclusively after that. 1973 Would be his final season. He reported for Spring Training in '74 but was released before the season began.
Posted by Chris Stufflestreet at 8:30 AM