If it weren't for the presence of the slightly older Willie Stargell, this guy might have been seen as the "old guy" on the 1979 Pittsburgh Pirates: 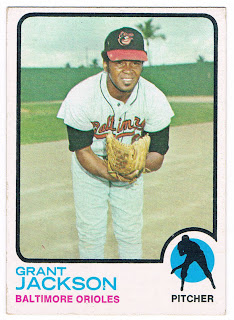 Card #396 -- Grant Jackson, Baltimore Orioles
Grant Jackson still performed abmirably, though. Facing his former team (and playing with the team he had faced in the 1971 Series), he was the winning pitcher of Game 7 after taking the mound while down 1-0 in the fifth inning and holding the O's scoreless until Kent Tekulve finished up. In the final game of the decade, a team that had been counted out too many times had shown what a little resilience and a lot of hard work can accomplish.

Jackson came up with the Phillies in 1965 and played with six different teams in an 18-year career. He was trade to the Orioles after the 1970 season and was part of the ten-player deal between the O's and Yankees in 1976. After appearing in that year's World Series, Jackson was drafted by the Seattle Mariners in the expansion draft but was dealt to Pittsburgh and stayed there through 1981. He bounced around after that, from the Expos to the Royals and back to the Pirates before retiring in 1982.

During his playing career, Jackson was largely a reliever and set-up man, except for a stint in the Phillies' rotation in 1969-'70. Although an 86-75 record, 79 saves and 886 strikeouts don't seem like much during an 18-year career, it's worth pointing out that he was part of six teams that eventually made the postseason.

After his retirement, Jackson moved into a coaching position with the Pirates and later with the Reds.
Posted by Chris Stufflestreet at 8:30 AM