This guy was known for refusing to use any profanity as a player: 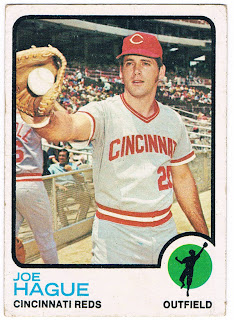 Card #447 -- Joe Hague, Cincinnati Reds
It wasn't exactly because Joe Hague was worried about being a poor role model; his father had been a career Army sergeant, and he definitely used foul language when he was younger. Hague realized that it was a "crutch" and avoided using them. Instead, whenever he was feeling somwewhat saucy, he'd simply replace any offending word with the term "mullet." That term was not yet in vogue as a name for a hairstyle, but George Kennedy used it in the 1967 film Cool Hand Luke, so it was in use back then. Still, I wonder if that ever confused teammate Don Gullett.

Shown here during pregame warmups, Hague was new to the Reds in 1972. He had been signed by the Cardinals in 1966 and smacked a grand slam in his first professional at-bat. He made the parent club late in 1968 but was behind Orlando Cepeda on the depth chart at first base. When Cepeda was traded the next year, he was ready to start but had some issues hitting the ball. As a result, he went back to the minors and worked on his problems, regaining a starting job in right field by 1970. In 1972, he was traded to the Reds for Bernie Carbo.

He helped the Reds get to the World Series in 1972, but a hand injury in 1973 hastened the end of his major league career.