Today Calls For an Appreciation

Today is Memorial Day, when we pay our respects to our fellow Americans who've fallen in the defense of our country. Since the 1973 Topps set doesn't feature anybody who's been lost in battle, I'll focus on one of the men who lost two seasons of his career to wear a different type of uniform: 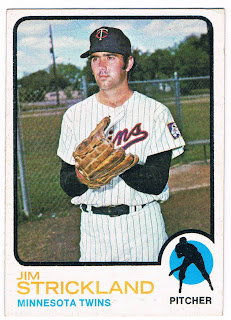 Card #122 -- Jim Strickland, Minnesota Twins
In Jim Strickland's case, he missed the 1967 and 1968 seasons due to military service. At the time, a draft was on and everybody was expected to register for it. Baseball players weren't exempted, but somehow many of the best players were able to get into a reserve unit to limit their time away in case the military came calling. That didn't always happen, and in Strickland's case he was called by the regular Army and willingly went to do his part.

At the time he was tagged by Uncle Sam, Strickland was working his way through the Dodgers' farm system. Upon his discharge, he returned to AA Albuquerque, where he spent the 1966 season. In 1970, the Twins picked him up in a totally different draft and he made his big league debut in 1971. After the '73 season, he was traded to Cleveland and appeared in four games for them in 1975.

A relief specialist, Strickland took the mound in 60 games in the majors. His final record was 4-2 and his ERA was a respectable 2.63. He spent at least part of all of his seasons in the minors and stayed in organized baseball through 1976. But he was ready when he was called, whether it was his skipper or his country making the call.
Posted by Chris Stufflestreet at 8:30 AM