When this picture was taken, this team was only fifteen years removed from Brooklyn: 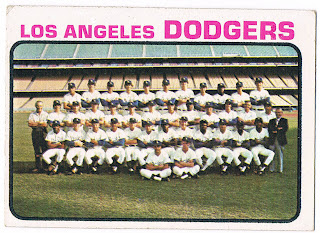 Card #91 -- Los Angeles Dodgers Team Card
The Los Angeles Dodgers left their "lovable losers" tag at Ebbets Field, winning the World Series in their second year on the West Coast. Then, just to quiet any detractors who pointed out that they weren't facing the Yankees that year, they got their chance in 1963. Not only did they beat the Yanks, they swept them in four games (something nobody was able to do before). They added another ring two years later.

By 1972, the players who came over from Brooklyn were gone, even as manager Walt Alston remained and Junior Gilliam took a place on the coaching staff. The team still kept an eye on its history, though, by retiring the uniform numbers of Jackie Robinson and Roy Campanella, along with Sandy Koufax's. They finished third that year, ten and a half games behind the Big Red Machine.

In 1973, the Dodgers were more competitive. They finished in second behind the Reds, three and a half games out. Another coach who played with the team in Brooklyn joined the staff. He was Tommy Lasorda, and he would be the manager who led the team to two more World Series titles in the next decade.
Posted by Chris Stufflestreet at 8:30 AM