Playing in the same Spring Training location where most of his Expos teammates would pose for their own cards, this player had just wrapped up what would prove to be his best season: 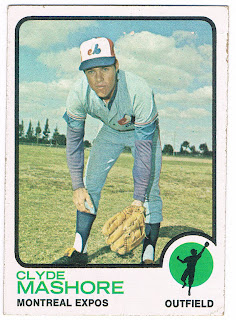 Card #401 -- Clyde Mashore, Montreal Expos
That wasn't saying a whole lot; Clyde Mashore played in 93 games, made 202 official appearances at the plate and hit .227. It was his fourth major league season and the first to see him hit over .200.

Mashore came up to the majors in 1969 as a member of the Cincinnati Reds. He got into two games (one in July as a pinch hitter, and the other in September as a pinch runner), and both of them saw him take the field in the bottom of the ninth. He flied to right in his only plate appearance with the team, but scored in his pinch-running effort. The Reds weren't exactly hurting for outfielders, so Mashore went back to the minors for 1970 until he was traded to the Expos midway through the season.

He stayed in Montreal through 1973, mainly taking a spot in the outfield but occasionally playing where he was needed: off the bench, as a late-inning replacement and even handling second and third base for one game at each position. His son Damon Mashore played for Oakland and Anaheim from 1996-'98.
Posted by Chris Stufflestreet at 8:30 AM