Veteran of Two Tours of Duty in the Bronx

As a young collector, I knew this player because he wore Yankee pinstripes: 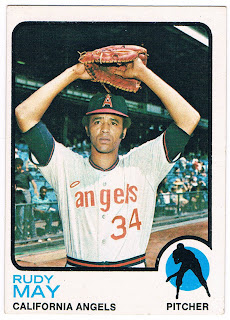 Card #102 -- Rudy May, California Angels
It was actually Rudy May's second tour of duty with the club. He was with the team from 1974-76 and then again from 1980-'83 to finish his career. And yes, I say "tour of duty" because that's a good description of the Yankee clubhouse during those years. The first tour was the early Steinbrenner era, when a new owner was weeding out what he thought were contributing elements of a losing team, and the second was an era of a managerial "revolving door."

May's first season was 1965, when he went 4-9 with the Angels. Between the military and more seasoning in the minors, he wouldn't return to the parent club until 1969. Despite an excellent curveball, he ran a 51-76 record in California before being traded to the Yankees early in the 1974 season. He rarely fell below the .500 mark after that, however, and posted a respectable 14 wins in 1975. In '76, he pitched the first game played in the "new" Yankee Stadium but was later involved in the massive 10-player trade between the Yanks and Orioles that impacted both teams for the next several seasons.

May pitched in Baltimore for two seasons and was traded to Montreal, where he spent two additional seasons. Before the 1980 campaign, he went back to the Yankees as a free agent. His 1980 season was a good one; he led the American League in ERA and posted a respectable 15 wins. He also made the postseason for the first time. He returned to the postseason in '81, and transitioned to the bullpen for the final two years of his career.
Posted by Chris Stufflestreet at 8:30 AM