This guy was present at three games in the 1970s that were forfeited due to misbehavior on the part of the fans: 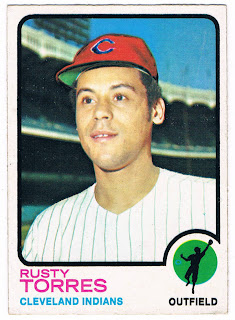 Card #571 -- Rusty Torres, Cleveland Indians
In 1971, the Washington fans tore up the field to "celebrate" their exit from the city, but didn't wait for the end of the game. In 1974, Cleveland hosted a "Ten-Cent Beer Night" and the results weren't pretty. Finally, there was the infamous "Disco Demolition Night" in 1979. I outlined all three games on my other blog.

Rusty Torres is airbrushed into an Indians cap here, but the artist decided to leave his Yankee pinstripes intact. After coming up with the Yankees in 1971, he was dealt to Cleveland as part of the Graig Nettles trade, too late to get a picture of him in his correct uniform. Late in 1974, the Tribe sent him to California, but he spent all of 1975 in the minors. He spent two seasons with the Angels and another two with the White Sox, before finishing his major league career with the Royals in 1980. The next season, he signed with the Pirates but was unable to rise above the minors and hung up his spikes.

After his retirement, Torres was a baseball coach in Oyster Bay, New York and ran an organization called Winning Beyond Winning which teaches the importance of a well-rounded education in addition to excellence in sports. Unfortunately, Torres recently made the news for a disturbing accusation. Since this is an ongoing case, I'll avoid commenting on it other than to say that I hope he's innocent of the charges. If he's guilty, he should never be allowed around children again.
Posted by Chris Stufflestreet at 8:30 AM