A Man Called "No Neck"

Walt Williams was known as "No Neck" because of his muscular frame and short (5' 6") stature. That's not as evident in this photo, which shows him turning his head: 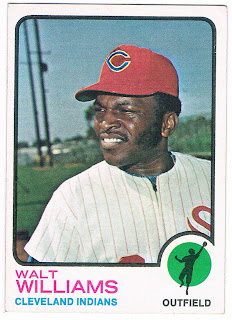 Card #297 -- Walt Williams, Cleveland Indians
However, there's a problem, and it isn't Williams' fault at all. It's Topps': the "S" from his old White Sox jersey is still showing despite an airbrushed Tribe cap.

Walt Williams originally came up for a short trial with the Colt .45s in 1964. However, he was soon placed on waivers and claimed by the Cardinals. By the time he made it back to the majors in 1967, he had been traded to the White Sox, where he spent most of his career. After the '72 season (as shown on this card) he was traded to Cleveland but only stayed there for '73. Two more years followed with the Yankees and then another two in Japan before he called it a career.

Among baseball fans, he may be best known for his nickname. With card collectors, he is remembered for appearing as one of the few current players in Brendan Boyd & Fred Harris's The Great American Baseball Card Flipping, Trading and Bubblegum Book. As for the caption under his 1969 Topps card...it referred to his nickname.
Posted by Chris Stufflestreet at 8:30 AM