As a young fan of the New York Yankees during the late 1970s, I definitely remember this guy: 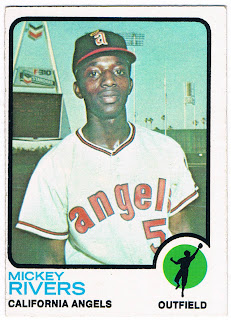 Card #597 -- Mickey Rivers, California Angels
The photo here seems to be a little overexposed. It also looks like it was taken at the same session that produced his 1972 Topps card. The poles that rise to the left of his head support the halo at Anaheim Stadium that made for some really great '72 Topps cards like this one.

"Mick the Quick" had begun playing with the Angels in 1970 and was still a part-timer when this photo was taken. He finally became the team's starting center fielder in '74 and showed his speed by winning the league's stolen base crown the following year. After that, he was traded to the Yankees for the '76 season and responded with a career year. He would spend three full seasons in the Bronx, and each year ended with a World Series appearance. In 1979, he was traded to the Texas Rangers and remained with them until 1984. When he retired, Rivers had a respectable .295 career average.
Posted by Chris Stufflestreet at 8:30 AM