That's a Lot of Bases to Step On

While baseball fans watched as Hank Aaron chased another, better-known record in '73, few may have noticed that he set a new all-time record in '72: 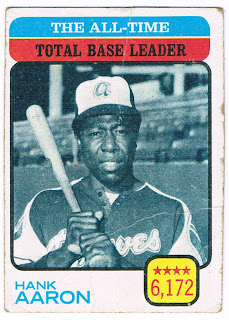 Card #473 -- Hank Aaron, All-Time Total Bases Leader
Late in the season, he surpassed Stan Musial's record of 6,134 total bases. He ended up retiring with 6,856 in all, and still holds the record today. The Top 10 list on the back has been assaulted by players like Carl Yastrzemski and George Brett, Dave Winfield, Cal Ripken and Pete Rose, with Barry Bonds finishing in 4th place. The card's #10 player was Honus Wagner, who now sits at #22 all-time.

The active leader is Alex Rodriguez, who now has 5,043 and would have to maintain his average yearly production for about another six years to break the mark. It's too early to say whether that will happen, but it's probably safe to say that this is a record that Aaron will likely own for quite a while. The next active player under the age of 35 on the all-time list is Albert Pujols, who has 3,580 total bases.
Posted by Chris Stufflestreet at 8:30 AM