Now THAT is Noticeable...

This card looks a little off.

While the condition may leave a lot to be desired, the picture on this card is a real eyesore: 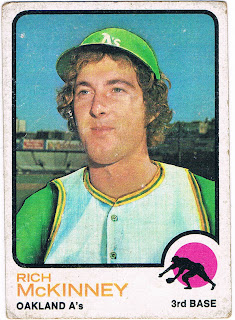 Card #587 -- Rich McKinney, Oakland A's
Let's look past the fact that Rich McKinney looks a little bit like Owen Wilson here. This photo is such an obvious airbrush job, it refuses to let me flip through my 1973 binder without stopping to look at it again. The green color is wrong, and so is the perspective of the logo on his cap. Even a six-year old kid with crayons may have been able to do a better job here.

Rick McKinney had spent the '72 season with the Yankees after two with the White Sox. He was traded after the season as part of the deal that brought Matty Alou to the Bronx. He was used only sparingly in Oakland, spread out over several positions and at DH but never being more than a part-time player. After several trips to the minors and short trials with the club through 1977, McKinney was out of the game. He never managed to appear on another Topps card after 1973, nor did he get into any of the A's postseason series.
Posted by Chris Stufflestreet at 8:30 AM