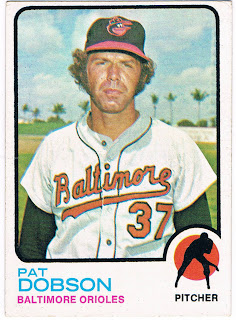 Card #34 -- Pat Dobson, Baltimore Orioles
I can't figure out whether Dobson is trying to look intense for his card, or if he's just annoyed to be dealing with the photographer. The cartoon on the back of this card is interesting. It says, "Pat suffered a broken toe in 1969." As if there are people who otherwise would have enjoyed it.

A member of the 1968 World Champion Tigers, Pat Dobson is perhaps best known to baseball fans as one of the four pitchers on the 1971 Baltimore Orioles staff to win 20 games. However, he followed those 20 wins up with an American League-leading 18 losses in '72 and the Orioles traded him to Atlanta after the season. He split the '73 season with the Braves and Yankees and won another 19 games in '74. Then another subpar year in '75 landed him in Cleveland, where Dobson finished his career in 1977.

At the time this card came out, Pat Dobson had a 61-61 lifetime record. He would add another 61 wins to that total before he finished. Sadly, he passed away in 2006 from leukemia.
Posted by Chris Stufflestreet at 8:30 AM