"Catching" Up With the New Guys

All three of these guys would have more Topps cards. In fact, one of them would have his sons on their own Topps cards a generation later. 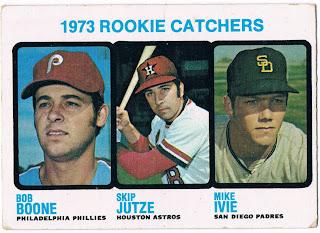 Card #613 -- 1973 Rookie Catchers
Bob Boone was a legacy. His father was Ray Boone, who had been an infielder with the Indians and Tigers, among others, between 1948 and '60. He played 19 seasons, mainly with the Phillies and the Angels. While not known for his batting, he was among the finest defensive catchers of his era. He was a key member of the Phillies' 1980 World Series champions and helped lead the Angels to two AL West titles in the 1980s. He would go on to manage, and also raised two major league sons: Aaron and Bret Boone.

Skip Jutze wasn't in the majors anywhere near as long as Boone was. After a short stint with the Cardinals in '72 (hence the airbrushed cap), he was able to start 78 games for the Astros in 1973. That would be his most productive year, though. He was a part-timer through '76 and played his final season as an original member of the Seattle Mariners in 1977.

Mike Ivie had already appeared on a Topps card in 1972 but hadn't yet shed the rookie label. In fact, he never played in the majors in 1972 or '73. He wasn't destined to make the majors as a catcher, so he switched to the infield and became a successful first baseman and third baseman beginning in 1974. He spent most of his career with the Padres and Giants, finishing with Detroit in '83.
Posted by Chris Stufflestreet at 8:30 AM