Not THAT Chuck Taylor

The name "Chuck Taylor" may remind people of a pair of Converse basketball shoes. However, this guy wasn't the person they named the shoes after. As you can see, he looks really dejected about it: 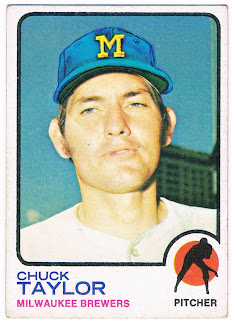 Card #176 -- Chuck Taylor, Milwaukee Brewers
The airbrushing was necessary, as Chuck Taylor was quite traveled in 1972. He had been traded to the Mets before the season and spent most of the year at their AAA affiliate in Tidewater. He was eventually traded to Milwaukee late in the season, where he pitched 5 games. However, by the time this card began showing up in packs, Taylor had changed teams once more...to Montreal.

1973 was a slow year, as Taylor only saw action in eight major league games. However, 1974 was the best season he became a dependable relief specialist for the Expos. He didn't keep up the same level in 1975 and finished his career the next season.
Posted by Chris Stufflestreet at 8:30 AM