When you're a collector who happens to be an adolescent boy (as opposed to just being an older one who's just that way mentally), guys whose names happen to be Peter, Dick or Rod are unintentionally hilarious. I probably show a lack of class by bringing this up, but it's a fact of growing up. And it's why the picture on this card would have made me laugh when I was 14: 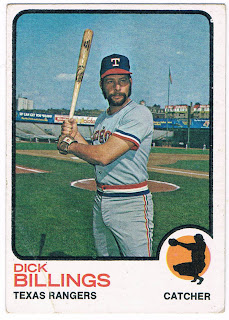 Card #94 -- Dick Billings, Texas Rangers
Since there will always be a 14 year-old stuck inside my head, I have to say it. A card showing a guy who calls himself "Dick" really shouldn't also show a bulge in certain areas. In fact, it may just be wise to crop the photos so all that is shown is above the waist.

Now, on to the more serious part of this entry...

Dick Billings was a Detroit-born player who came over with the Texas Rangers when they moved down from Washington. Though shown here as a catcher, he was known to play several positions. With Washington from 1968-'71, he played in the outfield and at third base; in fact, he never caught a major league game until 1970. 1972 was his first year as the regual catcher, but in '73 he went back to playing all over the field. He did, however, catch a no-hitter by Jim Bibby that year. In 1974, he was bought by St. Louis and played a handful of games with them through 1975.
Posted by Chris Stufflestreet at 8:30 AM