Last time around, an original member of both Seattle franchises was featured. This time, here's an original New York Met: 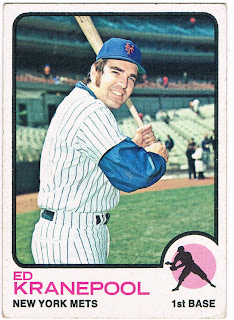 Card #329 -- Ed Kranepool, New York Mets
A decade after the Mets began playing, Ed Kranepool was the last member of the '62 club still on the team. He was there through some real peaks (like the '69 World Series championship) and valleys (all those lousy teams before '69). He would remain with them through the end of the 1979 season.

There were some personal peaks and valleys during that ride as well. After coming up to the Mets late in 1962, he was largely relegated to the bench. When asked why, Casey Stengel famously said, "he's only seventeen and he runs like he's thirty." Splitting the next two seasons between the minor leagues and the parent club, he made the All-Star team in 1965. After winning his Series ring, he was demoted again to the minors in 1970. Though such an assignment might cause many veterans to consider retiring, he took it in stride and improved his hitting after returning again in 1971.

In 1973, he lost his starting job at first base to John Milner and largely played in the outfield or came off the bench that season. He played four games in the World Series but didn't start in any of them. For the rest of his career, he filled in where he was needed and provided the veteran presence for the team.

Two short things about Kranepool: in 1965, when Warren Spahn came over to the team, he surrendered his uniform number (21) for the veteran pitcher and took uniform #7, which he'd wear the rest of his career. Also, when owner Joan Payson died in 1975, Kranepool was the only Met player to be invited to her funeral.
Posted by Chris Stufflestreet at 8:30 AM