Is This a Pitcher or an Accountant?

This guy doesn't look like a ballplayer. With his glasses and youthful appearance, he looks more like the kid who writes in the scorebook for a junior varsity team: 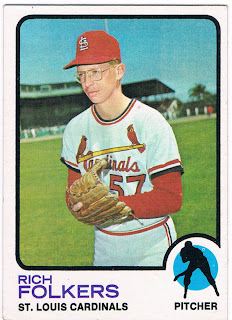 Card #649 -- Rick Folkers, St. Louis Cardinals
The palm tree and grandstand in the background show that this photo was taken in Spring Training, but Folkers spent most of '72 between two minor league clubs before getting called up to the parent club in September. His only previous big league experience before that was a short call-up by the Mets in 1970.

When this card was issued, he'd recently earned his first major league win. On September 30, 1972 he came in during the 14th inning of a 1-1 tie against the Cubs, got out of a jam and pitched two more innings to get the win. The last out came when he struck out Billy Williams.

He was used both as a starter and reliever during his career and went 11-6 for the Cardinals in his four years with them. It was the only one of his four teams where he had a winning record. He would go on to pitch for San Diego from 1975-'76 and for the Brewers in 1977. He was traded to Detroit before the 1978 season but never played for them.
Posted by Chris Stufflestreet at 8:30 AM