A while back, I showed Jim Hunter's 1973 Topps card on this blog. "Catfish" is shown throwing a baseball but not letting go of it. Today, another Hall of Fame pitcher gets tricky with the ball. 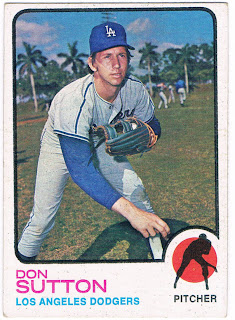 The follow-through is done. In fact, Sutton appears to be posing exactly the way the silhouette below him shows. He even shows off the two fingers he uses to throw his pitch with. However, the ball is still in his glove. Perhaps he's using more than one ball; perhaps he's playing that game where the catcher pops his hand in the mitt and then tells the batter, "you mean you didn't see that one?"

Don Sutton's story is a real rags-to-riches tale. He was born in a small Alabama town to sharecroppers and literally lived in a tar-paper shack. When he was born, his parents were still in their teens. That background taught him the value of hard work, which is what he did when he took the mound. Sutton was never the most dominating pitcher on his staff -- he only won 20 once, in '76 -- but consistently plugged away for 23 years and ended up winning 324 games, striking out 3,574 and notching 58 shutouts. He eventually entered the Hall of Fame in 1998.

He also holds the dubious distinction of having the most at-bats for a player who never managed to hit a home run. And that's taking into account that he spent 1982-'87 in the American League.

The back of the card mentions the Sutton worked as a radio DJ in the off-season. That was likely a good training ground for his next career as a broadcaster. He's been doing that since 1989, as a radio announcer and color commentator on TV.
Posted by Chris Stufflestreet at 8:30 AM