One of the neat things about baseball is the way that even minor trivial issues can be brought up. For instance, there's this guy: 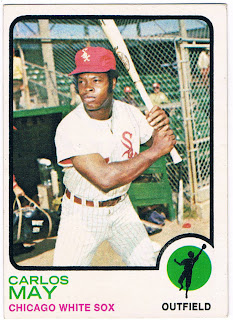 Card #105 -- Carlos May, Chicago White Sox
Carlos May was born on May 17, 1948. He also wore uniform #17. That meant the back of his uniform would read "MAY 17"...his birthday. According to Wikipedia -- so take it for what it's worth -- he's the only major league ballplayer who has ever worn his own date of birth on his back.

Carlos May was also the brother of major leaguer Lee May. He came up in 1968 and was named Rookie of the Year by The Sporting News in 1969 (but Lou Piniella got the league's award). Moving over to first in 1971, May became a full-time outfielder for the White Sox again in 1972 when Dick Allen came over to the White Sox. 1973 was probably his finest season, where he reached career highs with 20 home runs and 96 RBIs.

In 1976, he was traded to the Yankees and managed to play in his only postseason. However in '77 he was dealt to the Angels. The next year, he went to Japan and played there for four seasons before calling it quits in '81.
Posted by Chris Stufflestreet at 8:30 AM