Sometimes, it's possible to possess a dangerous weapon and still not pose much of a threat: 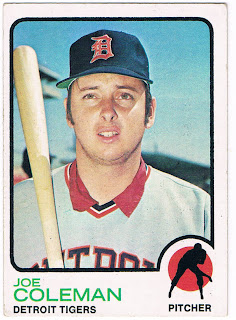 Card #120 -- Joe Coleman, Detroit Tigers
This photo of Joe Coleman shows him holding a bat. That may look odd for an American League pitcher, but when it was taken in 1972, it was the last year before the league adopted the DH rule. And from the looks of Coleman's facial expression, the rule couldn't come a minute too soon. After all, he hit .106 for his career.

Joe Coleman was the son of another Joe Coleman, who pitched in the American League between 1942-'55 (minus three seasons for military service in World War Two). His son is Casey Coleman, who came up with the Cubs in 2010. That makes the Colemans the fourth three-generation baseball family after the Boones, the Hairstons and the Bells, but it was the first one where all three generations were pitchers.

Unfortunately, he struck out a lot when he was holding the bat, too.
Posted by Chris Stufflestreet at 8:30 AM