I've seemed to neglect a lot of Hall of Famers on this blog lately. It's been six months since the last one was featured. Rest assured, there are plenty of them and I still have some big names left in the set including two rookie cards of Hall of Famers. But, let's toss out one of the more unflattering shots of the entire 1973 Topps set: 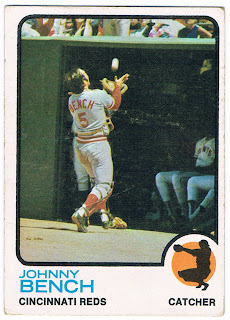 Card #380 -- Johnny Bench, Cincinnati Reds
From another angle, this might have been an excellent picture. Johnny Bench is making a catch of a foul ball. But...(maye that's not the word to use here) Bench's shot is taken from the worst possible angle, showing him from the back. It's been said that he sometimes refuses to sign this card because the photo is so ridiculous. Now, whether that's truth or simply a hobby legend depends on somebody taking this card to Bench at a card signing. And I'm not paying for him to scribble on this card.

I probably don't have to recap Bench's career, as he was one of the biggest stars of his day. He played his entire 17-year career in Cincinnati and led the Reds to back-to-back titles in 1975 and '76. He was a perennial All-Star, getting picked from 1968-'80 and again in 1983, and won every Gold Glove Award from 1968-'77. He was the National League's Most Valuable Player twice, in 1970 and '72. After his career was over, his number 5 was retired by the Reds.

As a rookie, he immediately showed who was the boss. Pitcher Jim Maloney kept shaking him off when he was signaling for a breaking ball because he wanted to throw a fastball. When Bench yelled, "your fastball's lost its pop!", Maloney let out a stream of expletives at the rookie. To prove his point, Bench took off his glove and caught the fastball barehanded. Maloney eventually trusted him enough to throw a no-hitter under his tutelage in 1969.

In my own youth, he was the leader of The Baseball Bunch, where he instructed the kids on the team about baseball fundamentals (along with dozens of his fellow players) and kept the San Diego Chicken in line.
Posted by Chris Stufflestreet at 8:30 AM