For the second entry in a row, Topps had some work to offer its airbrush artist: 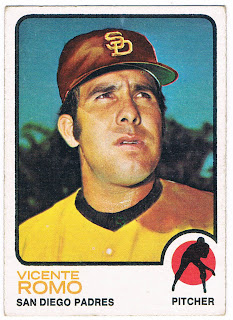 Card #381 -- Vicente Romo, San Diego Padres
Vicente Romo was just beginning with the Padres in 1973, after a trade brought him from the White Sox. He came up to the majors in 1968, where he pitched a single inning before being returned to the Cleveland Indians, the team that had originally signed him in 1964. He also pitched for the Red Sox from 1969-'70. A reliever, he stayed in San Diego through 1974 and then went back to Mexico, his native country.

In Mexico, Romo was an unparalleled star. During his U.S. career, he would sometimes go home and pitch, before giving another try in the North. During the 1960s and 70s, he was one of the most feared pitchers in the LMP. He pitched a perfect game in 1967 and amassed a record 182 wins and the all-time lowest ERA in the league. His nickname "Huevo" (meaning "egg") came from the zeros that were racked up on the scoreboard when he pitched.

He did make it back to the majors, pitching for the Dodgers again in 1982. He then returned again to Mexico, where he played into his 40s. He was inducted into that country's Hall of Fame equivalent in 1992 and is still considered one of the legends of the sport there.
Posted by Chris Stufflestreet at 8:30 AM