This Guy Could Have Been in a Stroh's Commercial...Or Maybe Not

Shortly after the time this card appeared in packs, this guy was placed on waivers by the only team he'd ever played for: 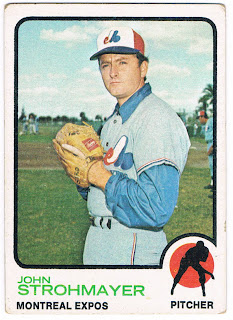 Card #457 -- John Strohmayer, Montreal Expos
With the Montreal Expos, John Strohmayer had accumulated an 11-9 record since 1970. He was largely a reliever, but occasionally called to start as well, especially in 1971. With the New York Mets, he went 0-0. With only a single inning at the end of 1974 after a season in the minors, his career was finished.

A South Dakota native, Strohmayer was bothered late in his career by shoulder problems. So he went to school and became a teacher. He taught in California from 1976-'92 and worked his way up the rakns from there, eventually becoming a superintendent by 2002. He retired from that career in 2009 after 32 years.

That year, he took a share of a lottery jackpot worth millions.
Posted by Chris Stufflestreet at 8:30 AM