This player has a pretty cool 'fro peeking out underneath his Orioles cap. While it isn't Oscar Gamble-worthy, it's still cool: 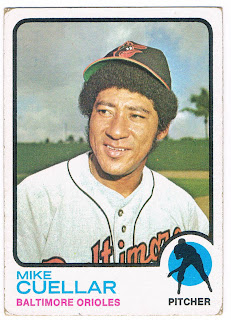 Card #470 -- Mike Cuellar, Baltimore Orioles
Between 1969 and 1973, Mike Cuellar was part of one of the most feared starting rotations in the major leagues. He shared the 1969 American League Cy Young Award, made the postseason  five of those six seasons and was part of the only staff besides the 1920 Chicago White Sox with four 20-game winners. Today, it's something special when one pitcher gets 20 wins; having four on the same team is a phenomenal feat. In fact, it's been 10 years since the last time a pair of teammates (Derek Lowe and Pedro Martinez of the Red Sox) turned the trick.

Cuellar first came up with the Reds in 1959, pitching four innings and notching a 15.75 ERA. After several transactions and some time in the Mexican League, he returned with the 1964 St. Louis Cardinals, where the Cuban native took a relief role and helped the team get to the World Series. He went to the Astros the next year, where he transitioned to the rotation. After several years as Houston's prime lefty, he joined the O's in 1969.

Cuella was a four-time 20 game winner with the Orioles and logged a 143-88 record in his time with the team. But, as his advancing age dropped him to a 4-13 mark in 1976, the team released him. In 1977 he signed with the Angels as a free agent, but only pitched in a couple of games with them. He wasn't finished though; Cuellar returned to the Mexican League and continued to pitch, even making the Senior League when he was over 50.

Sadly, stomach cancer claimed him in 2010.
Posted by Chris Stufflestreet at 8:30 AM