After retiring from the game, this guy worked as a freelance writer: 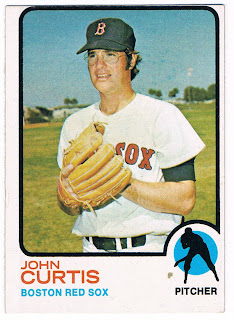 Card #143 -- John Curtis, Boston Red Sox
That said, John Curtis actually had a fairly long pitching career, spanning 15 seasons from 1970-'84. He finished with the Red Sox -- the first team he pitched for -- in 1973. After the season, he was traded to St. Louis and was there through 1976. He was dealt to the Giants then, and pitched with that team until 1979. Free agency sent him to San Diego for a few years, and a purchase by the Angels in 1982 sent him to his last big league team.

His stints in Boston. St. Louis and later San Diego saw him used in the rotation, while the other teams were content to use Curtis as a set-up man. He notched 10 or more wins 5 times in his career; unfortunately, he lost more in a season (14) than he ever won (13).

After retiring, Curtis wrote pieces for Sports Illustrated as well as for several newspapers. The upstate New York-raised, Clemson educated Curtis eventually returned to the diamond as a pitching coach, beginning in 2000.
Posted by Chris Stufflestreet at 8:30 AM