The Switch at the Keystone

At the time this card was issued, this player was a regular shortstop. The next year, he switched to second base: 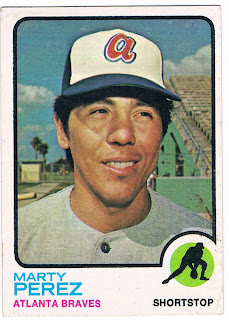 Card #144 -- Marty Perez, Atlanta Braves
Here's a little-known fact about Martz Perez: he is one of the few players who ever pinch hit for Hank Aaron. Even late in his career, few could say they ever picked up a bat and stood in for "The Hammer."

Perez came up in 1969 with the Angels after growing up in Visalia, California. After the 1970 season, he would be traded to the Braves, the team that used him most on the diamond. He stayed with them through 1975, when he was sent to the Giants in a deal that also included Darrell Evans. After that, he seemed to move around frequently: in '77 he was dealt to the Yankees but only used in a single game. A month later, the Yanks sent him to Oakland. He became a free agent at the end on the season, but resigned with the A's. However, the team released him in 1978 and he signed with the Mets. Once that team -- as bad as it was -- kept him in the minors, he saw the writing on the wall and retired.
Posted by Chris Stufflestreet at 8:30 AM